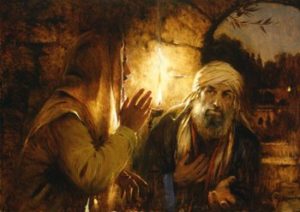 The Gospel reading today has one of the most beautiful lines ever written:

“For God so loved the world
that He gave His only Son,
so that everyone who believes in Him
might not perish
but might have eternal life.”

But what does it mean to believe in the Lord?

The story of Nicodemus, with whom Jesus speaks in today’s passage, shows us that believing is a process. He appears three times in John’s gospel.

Nicodemus was a Pharisee who, the first time he is mentioned, approached Jesus to learn more about this unconventional rabbi. But, we are told, he came to see Jesus “at night.” Nicodemus was understandably concerned about what others would think about his interest in Jesus, and for this reason, preferred that his meeting with Jesus be kept a secret one(John 3:1-21).

This first Nicodemus we meet was intrigued not only by the authoritative teachings of the Lord, but also by his no less authoritative actions: Right before this episode was the Cleansing of the Temple, when, much to the horror of the Jewish elders, Jesus drove the merchants and money changers out of the Temple of Jerusalem, declaring them unfit to be in the house of His Father. Something about the passion and audacity of this teacher from Nazareth might have attracted Nicodemus enough to arrange for the meeting although he remained understandably hesitant and fearful.

The second time we meet Nicodemus, his fellow Pharisees had already arranged for the arrest of Jesus, which failed because the officers ended up themselves impressed by Jesus’ teachings (John 7:32-52). It was at this point that Nicodemus dared to differ from the others, pointing out to them the need to follow due process: “Does our law judge a man without first giving him a hearing and learning what he does?”

This Nicodemus had grown much bolder, even if, as he might expected, for his defense of Jesus, his colleagues simply dismissed him. To him they replied mockingly: “Are you from Galilee too? Search and you will see that no prophet is to rise from Galilee.”

We don’t know how Nicodemus responded, but we can guess that he might have kept his silence. It was enough that this time he had stepped out of hiding in the dark to show some sympathy for Jesus.

The third and last time we meet Nicodemus is right after the crucifixion, where he assisted Joseph of Arimathea, another influential man, in preparing the body of Jesus for burial (John 19:39-42). His participation in the burial was by no means a secret one; it could not have been, for we are told that he brought 100 pounds of myrrh and aloes–an excessive amount, according to Pope Benedict XVI in his book Jesus of Nazareth: Holy Week. The customary embalming spices that Nicodemus provided exceeded every normal proportion, fit for a royal burial!

This Nicodemus was a changed man–changed most likely by his personal witnessing of the suffering and death of Jesus. Finally, he was no longer a disciple in hiding. Whatever hesitation or fear he found in his heart before about professing his faith in Jesus had all but disappeared. He was now willing to step fully into the light as a disciple of the Lord, ready to face whatever consequences it might have. Somewhere along the way, he had grown in his faith, and witnessing the way our Lord embraced the cross, he had fallen deeply in love with Him.

Faith is a process. It begins with tentative steps towards Jesus, Who is the light of the world. At times we find ourselves hesitating between the darkness and the light. The baby steps we take will eventually lead us to stand fully in the light–but it takes time and God’s grace.

The problem with us is that we sometimes get impatient with our own lack of faith–and we give up.So if you’re wondering about your faith, or complaining about how weak it is or how slow its development, don’t. The message of the Gospel today is that we shouldn’t give up on either the Lord or ourselves. Its invitation is to keep taking those tentative baby steps, praying that God will give us the grace to turn them eventually into bigger strides.

One reply on “BELIEVING IS A PROCESS”

Faith is a process.

He is the potter, we are the clay.

Love this reflection, Father. Came to me just when I felt I had gone two steps back in my faith.

Thank you for this weekly sharing of your homily.