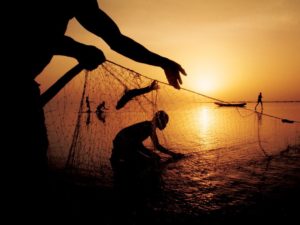 I’ve read this account of the Call of the First Disciples so often before, but it’s only my reading it this time around that something struck me as funny: Is it merely coincidental that our Lord chances upon these two sets of brothers in the midst of working with their nets? Think about it: Andrew and Simon casting their nets, and John and James mending theirs. Then out of nowhere comes this Nazarene who invites them to follow him, and the first thing these disciples do–these “fishers of men”–is to leave their nets behind.

Well, of course, you say. The nets and their boats are their means of livelihood, so now, as followers of Jesus, they no longer have any need for them. It’s quite symbolic because in leaving behind these paraphernalia of their former lives, they are, in fact, giving up what their lives used to be.

But maybe there’s more. Perhaps I’m overreading here, but I think nets are characteristic of fisherfolks, and for our Lord’s designated “fishers of men” to ironically leave their nets behind must mean something more.

I think we have some kind of clue in the story of Jonah in the First Reading. Jonah, as we know, is, like the first disciples, himself no stranger to fish. His God-given mission is simply to walk through the city (an enormously large one, we’re told) and repeat a one-line homily: “Forty days more and Nineveh shall be destroyed.” No apologies are offered, nor explanation, not even any suggestion! After doing the math, the people of Nineveh, on their own, collectively–and freely–decide to repent. Seeing this, God changes his mind and spares them from destruction.

Without knowing it, Jonah has worked as a “fisher of men” and he has accomplished his task without recourse to any net. I think this tells us a lot about how the Lord operates. He values and respects our freedom. So the Lord doesn’t want His “fishers of men” to employ any form of coercion, to use and cast nets, as it were. In this kind of work, nets are not required.

Pope Francis is, of course, a great example of a fisher of men who doesn’t cast nets. He has changed the tone of the Vatican from one that insists on doctrinal clarity at all costs to one of warm welcome and open invitation. The change of strategy seems to be working. Without changing a word of the Church teachings, he has changed the music–and it has made a world of a difference!

The Gospel message for us today is quite simple but important, especially in the aftermath of a wildly euphoric papal visit: Our salvation is, at the end of the day, in our hands. We can be inspired by the most effective and most inspiring fisher of men, one whose mere presence can melt the hardest of hearts and bring tears to the most skeptical of eyes, but no one–certainly not God nor His Pope–will force us to become better people. No nets will be cast. We need to make the decision ourselves, on our own, exercising our own freedom. It’s the way God prefers how our response to His invitation ought to be–free because only when it’s free can it be truly loving.

That’s the Lord’s general way of proceeding. But then having said that, I have to concede that of course, if He really wants to, God is also known to make exceptions and is not beyond exerting some kind of pressure on us if He so desires. All we have to do is think of the whale that God sent in pursuit of his reluctant prophet Jonah. This God of surprises has been known to send a big fish to catch men.

6 replies on “NETS NOT REQUIRED”

Thank you for this insightful reflection, Father! I’m glad Fr Nono shared it.

As your reflection began, I thought you were going to reflect upon nets as that which entangles us in life! As indeed, each one of us is also called . . .where we are. . . for something more. . . And life is full of entanglements.

We are grateful for the inspiration and service of those who so generously respond in fearless faith to God’s call (saints, popes, priests, also religious, and people we know in our every day lives). Thank you!

Very inspiring. Thanks. It is indeed our choice. To be touched or not. To be moved to change or to continue the status qou.

Thank you once again. Bringing in the element of freedom in our salvation!!! – is one angle only you could have seen in this gospel about discipleship. I always thought Peter , et al,
were mesmerized by the charisma of Jesus that without overtly choosing or thinking, they merely followed what we would think was a natural choice on their end.

Thank you for such an insightful homily. That our God is a God of surprises is something I never seem to fully grasp – He is always, as it were, catching me in surprise. This is another homily that will sit, ferment and hopefully bear fruit, in time, within my heart. Bless you.