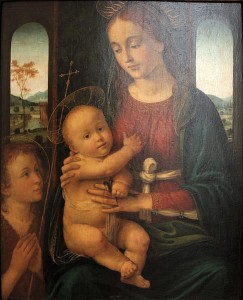 First to appear on the Advent stage is the familiar but disturbing figure of John the Baptist, the so-called “forerunner and messenger of the Lord.”

We’ve met this guy before: We’ve read about the announcement of his birth before his cousin’s. Yes, that other Annunciation where things didn’t exactly go well: His father Zechariah understandably thought himself and his wife way beyond the age limit for biological parenthood, the angel uncharacteristically lost his cool, and poor Zechariah consequently went speechless for virtually nine months. His prophet son, of course, eventually more than made up for that long silence.

The guy couldn’t wait to play prophet. When Mary, pregnant with Jesus, visited the equally pregnant Elizabeth, the still-unnamed future Baptist leapt in his mother’s womb and even then, even without words, already proclaimed the coming of “him who is to come.”

But this familiar and lovable child eventually grew up to be a disturbing and–let’s face it!–not-so-lovable prophet. After all, it’s hard to fall in love with someone you’re scared of–and what do you expect from someone who had this habit of preaching about sin and punishment wherever he went? Nobody likes a fire-and-brimstone sermon, but we sure need it–and because John the Baptist knew that, that’s exactly what he did all the time, never mind its impact on his ratings on the poll or with the politicians. His role was to be the forerunner, the messenger, and his one job was to prepare the way for “him who is to come.”

It was when Jesus finally did appear on the scene that the Baptist showed us his true color: He disappeared. As he sent his own disciples away to follow Jesus, he explained, “I must decrease as He increases.”

It wasn’t easy to do, but it was the expected thing to do. As John tells us in today’s reading:

“One mightier than I is coming after me.
I am not worthy to stoop and loosen the thongs of his sandals.
I have baptized you with water;
he will baptize you with the Holy Spirit.”

John the Baptist knew exactly who was coming; he had always known. But what even he, the forerunner and messenger, didn’t know–and had absolutely no way of knowing–was that the “One Who is to come,” the One Whose sandals none of us will ever be worthy to loosen, would Himself fall on His knees and stoop before us to wash and kiss our feet.

When you think about it, Advent is really just the beginning of many of God’s surprises.

3 replies on “WHAT THE MESSENGER DIDN’T KNOW”

As He continues to surprise us today. Spot on as usual. Many thanks!

This is so awesome! I am filled with a reawakening of and an appreciation and anticipation for our God of Surprises.

Wishing all a blessed Advent filled with hope!

There was always something so disturbingly fascinating in the Baptist. Thank you for reminding us today of his legacy