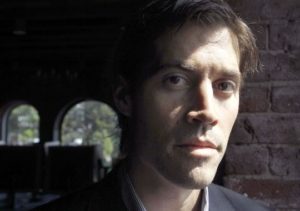 In today’s Gospel, our Lord tells us what following him entails: “Whoever wishes to come after me must deny himself, take up his cross, and follow me.”

These words were scandalous and shocking when they were first spoken, but today we tend to just nod in vague agreement whenever we hear them. These words have simply grown too familiar, and we’ve probably heard every sort of reflection and preaching on it that we feel we’ve heard it all.

It is a pretty radical call, but how literally are we supposed to take it?

The young American journalist, James Foley, seems to be one of those who did. You may have read about him in the news recently. He was kidnapped in November of 2012 in northwest Syria, where he was working as a freelance reporter for the Global Post. This was not his first skirmish with terrorists. For 44 days, he had been imprisoned in Libya by forces loyal to Gaddafi back in April 2011, but was fortunately released. In a letter to the community at Marquette, the Jesuit university from which he had graduated, Foley described how his faith and prayer had helped him survive those dark days.

“I began to pray the rosary,” he wrote. “It was what my mother and grandmother would have prayed. I said 10 Hail Marys between each Our Father. It took a long time, almost an hour to count 100 Hail Marys off on my knuckles. And it helped to keep my mind focused. Clare Gillis and I prayed together out loud. It felt energizing to speak our weaknesses and hopes together, as if in a conversation with God, rather than silently and alone.”

You would think that after surviving a trauma like that, Foley would keep away from dangerous places, but his friend, Jessica Desvarieux, explained why Foley flew to Syria despite the dangers: “Jim wanted to speak to the [Syrian] people so that we would get a sense of what’s really going on. . . . He wanted to share with the world [their] stories.”

In other words, he wanted to give the victims a voice. He believed in his faith that he was being called to do that even if it was dangerous. It was his way of following the Lord.

Unfortunately, this time, he did not survive. As a retaliation against the American airstrikes against the militants over the last two weeks, Foley was tortured by waterboarding and after 635 days in captivity, murdered by beheading, the gruesome crime recorded on video and posted on YouTube. The world is still reeling from the sheer brutality of his death.

What a wasted life, many people say. But the same can be said about the Lord. Even in death, Jim Foley followed Jesus, and his death inspires but also questions those of us who claim to be followers of the Lord. An authentic following of the Lord can be risky business, as shown by the countless followers who have been martyred all through the centuries. The question we need to ask ourselves is: Are we willing to take the risk?

When confronted by examples such as Jim Foley, I am forced to face myself and ask “would I do the same?” Sadly, the answer is “I don’t think so”. And I realize how weak my faith is.

Often, many of us quite ‘easily’ say, “I am a follower of Christ (or Catholic or Christian).”

However, each unique witness (how a person lives out his or her life), whatever his or her call, challenges each one of us to honestly ask the question – “What about MY life?” Big or small. . . do I take up my cross. . .and how?

Thanks for this reflection.

An authentic following of Jesus need not be as extreme as getting ourselves killed and/or martyred. We can find that we are challenged enough even in the everyday things we consider mundane.

Very true. Stories like Jim Foley’s invite us to ask about that possibility though.