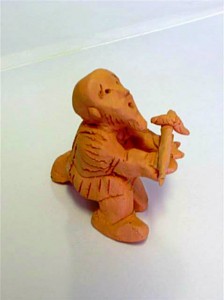 In today’s Gospel, our Lord likens the Kingdom of God to a hidden treasure and a pearl so valuable that it should make all the difference in one’s life. These two parables remind me of one of the most important lessons I’ve learned from St. Ignatius of Loyola, whose feast we celebrate today. This lesson is captured in a slogan that he’s known for: “Finding God in all things.”

I know, today it sounds almost like a cliché: We all believe God is present everywhere, don’t we? But we should note that Ignatius’ invitation is not simply to believe that God in all things, but to find Him and actually look for Him in all things. It’s like our Lord’s parables today telling us not just to believe that the Kingdom of God is here, but also to go and search for it, be it buried in some field or hidden in the deep seas.

“Finding God in all things” isn’t such an easy thing to do when we realize that we’re supposed to look for Him not only in prayer, not only in churches, not only in some beautiful scenery–in other words, not only in sacred and pretty places, but literally everywhere!–including the most unpleasant, most secular, even terrifying places in our lives. This is why Gerard Manley Hopkins, the 19th-century Jesuit poet, begins his poem “God’s Grandeur” by declaring that “The world is charged with the grandeur of God,” but later on adds–even when nature is “seared with trade; bleared, smeared with toil.”

Now, finding God in not-so-sacred and not-so-pretty places is hard enough, but things get even more complicated when God decides to “put on skin”–a habit He apparently picked up when He decided to become human in our Lord Jesus Christ. We all know what happened–or didn’t happen–then: Many who actually encountered Jesus of Nazareth didn’t fall on their knees before the Promised Messiah; and only a handful recognized the fullness of God’s Presence in Him–and with great difficulty and slowness. God is simply much harder to recognize “with skin on” because the fact is, the moment He puts on skin, His divinity goes into hiding.

In his letter to the Philippians, St. Paul uses the Greek word “kenosis”–which literally means, self-emptying: Our Lord emptied Himself of everything divine in order to become one of us. All throughout His earthly life, our Lord’s divinity was like a treasure buried deep in his humanity, a pearl that gleamed only occasionally and revealed itself fully only in rare moments like the Transfiguration and later on, the Resurrection–and even then, only to a select few.

Since the Incarnation, ours has been a “God with skin on.” Through the Risen Christ, God simply hasn’t stopped putting on skin since then. Unfortunately, very few people today are like the great prophet Moses in the First Reading, who walked around with “the skin of his face shining” as proof of God’s presence in him. Finding God in other people is something we need to put our hearts into and really work on. We need to strain our eyes, open our hearts, and dig deep to unearth the hidden treasure of God’s presence in others.

But to make matters worse, God usually chooses to put on skin that’s far from flawless. He prefers to put on skin stained with sweat, stench, and scars, making it virtually impossible for us even to think about looking for Him there. In that passage in Matthew on the Last Judgment, our Lord asks us one question at the end of our lives: “Did you do this or that to the least of my brothers and sisters?” And by “least” He means people precisely with far-from-flawless skin: the poor, the sick, the prisoners. No wonder it’s hard to find God and to love Him with skin on because our vision usually takes us only skin deep, and we all naturally tend to judge people based on how they look from the outside.

Now, it sure is hard enough to find and love “God with skin” on from the outside. But can you imagine what happens if we get an inside look at all the mess and chaos swirling in a person, if we get a pass to a private screening of a person’s entire history of weaknesses and wickedness? To find God there, to even conceive of seeking Him there–that’ll be the hardest thing to do.

But that’s exactly our call: To find and love “God with skin on”–not only from the outside, but also from the inside. And that’s why it’s so hard to love ourselves. It is only in ourselves, after all, where we get to see “God with skin on” from the inside–with all our fears, anxieties, and sins. If you’re anything like me, you can probably get quite harsh with yourself too. You’re probably your worst critic and least compromising judge. And finding God in yourself is most likely one of the toughest things to do.

But try we must–to find God in all things, in other people, as well as in ourselves. In another of his poems, Hopkins gives us the reason: “For Christ plays in ten thousand places, lovely in limbs, and lovely in eyes not his.”

Today, the Feast of St. Ignatius of Loyola, let us pray that we may be able to find our God in all things–God Who is, above all, Spirit, but also “God with skin on,” the God Who is buried like a treasure in the people that we can only see from the outside, but also the same God hidden like a pearl of great value deep under our very own skin. Through the intercession of St. Ignatius, may we receive the grace to love God as we find Him in “ten thousand places.”