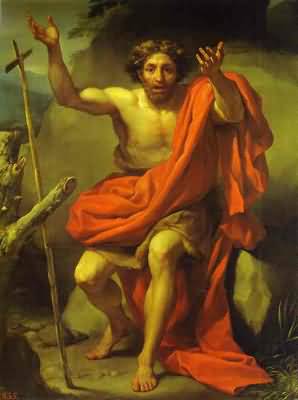 Hope you don’t mind, Lord, but your cousin isn’t exactly my favorite Christmas character.  Don’t get me wrong:  I think John the Baptist was pretty heroic, but I’m not sure if it’s right to read about him during Advent, as we did today in the Gospel, since we should be preparing for Christmas, shouldn’t we?

I’ll take the usual angels with their wings and halos anytime–or the shepherds visiting the manger or the wise men bearing their gifts.  Certainly not this ascetic prophet from the desert, who feeds on a diet of locusts and who, any chance he got, reminds us that we are sinners and need to repent.

Who wants to hear about a man whose life doesn’t have a happy ending?  The first time we meet him, he is dancing in his mother Elizabeth’s womb.  The last time we meet him is at another, but bloodier, dance:   Salome performs a dance that steals the heart of her stepfather, Herod, who, in that drunken moment, promises everything to her.  Upon the prompting of her mother, Salome asks for the head of John the Baptist on a plate.  Not exactly the kind of story you’d like to hear in a Christmas carol!

Whatever else we say about him, John the Baptist is one figure you won’t find hanging in most people’s Christmas tree.

But more than his tragic story, it is the meaning of his life that doesn’t quite seem to fit into this merry season.  After years of preaching in the desert and baptizing in the Jordan, John the Baptist, realizing that the time of the Messiah had arrived, told his disciples to follow Jesus instead, telling them that the Messiah must increase, but he must decrease.

What could that mean—all this talk of decreasing so that others might increase?  Dag Hammarskjöld, the former Secretary General of the United Nations, expressed this attitude beautifully when he wrote that we should pray for grace of what he called “transparency”—i.e., to vanish entirely as an end, but to remain purely a means.  To be so totally selfless, so that everything we do is for others.  In other words, to decrease so that others, including the Lord, might increase.

To be honest, Lord, in this world and age, who wants to decrease?  Isn’t it more fashionable these days to increase?  And in getting things done, isn’t it more effective to wield whatever authority we can wield and even throw our weight around especially when we face people who might hurt us?  Who wants to make himself small and defenseless in a world that can often turn hostile and dangerous?

And so it would seem that it’s probably best to reserve John the Baptist for some other, less festive season.

And so as Christmas approaches, we prefer leave John the Baptist behind in the desert and rush eagerly to the manger with all its usual angels, shepherds, and kings.  But as we break into song, we find in their midst the Christ child and realize that there in the scene of the very first Christmas we find–of all people–John the Baptist and everything that he stands for.

When I think about it, what is Christmas about, if not about the God who is infinite vastness decreasing Himself in order to become one of us so that we, in turn, might increase and become one of His?  Isn’t Christmas precisely about God’s “transparency”—when he showed us what it means to vanish as an end and to remain purely as a means—a means, that is, to our salvation?

And so, on second thought, maybe John the Baptist is a great Christmas figure, after all.  As he did in his life, today his life and his person both point to the life and person of Christ.  Indeed he paves the way of the Lord, which is the way of humility and self-sacrifice.

Dear Jesus, before I rush to the stable to gaze at your face, grant me the grace to linger in the desert to first learn from the Baptist.  Please allow his spirit to touch my heart, for his spirit is a reflection of your own spirit of humility and self-sacrifice.  Amen.

If you feel up to it, share a Quick Prayer here.