This homily, based on John 6:51-58, was delivered at St. Agnes Church for the Solemnity of the Body and Blood of Christ.

Sherry Turkle has a book called “Alone Together” The title is telling enough, but if there’s any doubt about what it means, the subtitle says it all: “Why We Expect More from Technology and Less from Each Other.”

We know what she’s talking about, don’t we? 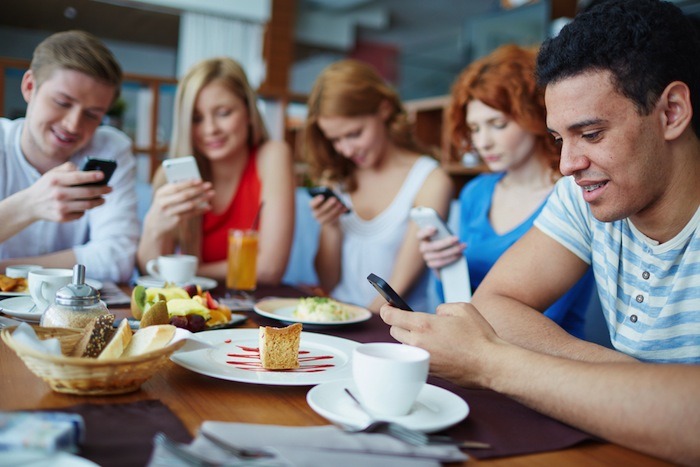 The other day I was at a cafe waiting for a friend. While waiting, I checked the messages on my phone, and sent out a few texts. I also browsed through Twitter just in case something is coming from the White House. Then I got tired of that, so I just decided to look around the cafe. It was only then that I began to notice my surroundings. All around me were people doing exactly what I had been doing: texting on their smartphones, scrolling on their tablets, or typing away on their laptops.

Even more striking was the fact that some of these customers weren’t alone; they had company–either with one other person or even with a group of people. There was even one family where the parents were busy with their individual phones, while their kid fidgeted with his tablet.

So the phrase that author Sherry Turkle immediately came to mind: “Alone Together.” It’s an oxymoron–after all, how can we be alone and at the same time together? But we know it to be true. Sometimes, as the author claims in her book, we do tend to rely on technology more than on one another. I know I do.

I mention all that because today is Corpus Christi Sunday–also known as the Solemnity of the Most Holy Body and Blood of Christ. But the feast is really about presence, isn’t it? What is the Eucharist, after all, but the real presence of our Lord among us. On the eve of his death, he wanted to assure his disciples that they would not be alone, so he established the sacrament of the Eucharist. Today one of the things we are invited to do is to appreciate the Lord’s continuing presence among us today.

He didn’t have to do that, of course. After all, God is present everywhere. So strictly speaking, after his Resurrection and Ascension, Jesus is present everywhere–in the nature all around us, in the people we encounter, in the events we experience in our lives. Strictly speaking, we shouldn’t require anything more than this spiritual presence. He is really already truly present among us.

But as usual, our Lord had a different idea. A better idea! He wanted his presence not just to be spiritual, but to be physical–even if it’s only in the outward form of bread and wine. He desired to be present to us fully–not just in spirit, but also bodily.

I think the Lord is trying to tell us something here. Could he be trying to remind us of the value of being present fully to one another? Could the Lord be telling us that virtual presence is great, but we shouldn’t rely on that if we can be more fully and physically present.

An unnoticed tragedy in all this is that we are losing what sociologists consider the deepest social skills that we human beings are supposed to have. In his blog called “My Distraction Sickness,” Andrew Sullivan observes thatthat many of us have acquired the tendency of reducing persons to “mere outlines”: We simply “become one another’s ‘contacts’–efficient shadows of ourselves.”

He adds: “Truly being with another person means being experientially with them, picking up countless tiny signals from the eyes and voice and body language and context, and reacting, often unconsciously, to every nuance.”

Unfortunately, if we don’t watch it, we will soon forget how to do all that.

Today, the Solemnity of the Body and Blood of Christ, the Feast of the Full Presence of the Lord, let us make an effort to be fully present to one another more.

5 replies on “ALONE TOGETHER”

As I teach a class, may You guide me to fully attend to each and every need of my student. Allow me to leave my worries and concerns out of the classroom so I could truly see the gifts that you planted among the learners in my class. As I focus in each one of them, I pray that I would be able to find ways on how I could lead them to You.

To be in a group, yet lonely, to be with family, yet alone, to be reassured in so many words that we are loved, yet ignored….yet to be aware of this brings us to yet another awareness….an awareness of the Presence…which gives us company and the peace in completeness we seek. Thank you, Father….who art here and in heaven…