Reading today’s parable made me recall a story I read somewhere about an emperor and a beggar.  It goes this way:

Once there was an emperor who met a beggar as he was coming out of his palace for his morning walk. He asked the beggar, “What do you want?”

To the emperor’s surprise, the beggar laughed and said, “You are asking me as though you can fulfill my desire!”

END_OF_DOCUMENT_TOKEN_TO_BE_REPLACED

It’s not easy to find a commencement speech that’s both wise and witty.  But I think that’s exactly what J.K. Rowling, bestselling author of the “Harry Potter” series, delivered  at Harvard last June 5, 2008.  The title she gave the speech gives you a fairly good idea of the gems of wisdom that she offered the Harvard graduates: “The Fringe Benefits of Failure and the Importance of Imagination.”  Even for non-Harry Potter fans, the speech is worth reading in full–and thanks to technology, we can even watch the delivery itself (see below).

END_OF_DOCUMENT_TOKEN_TO_BE_REPLACED

Once in a while we see something on TV that stops us on our tracks.  On two separate occasions, while channel-surfing with the remote, I caught two interviews with Ingrid Betancourt–one by CNN’s Larry King and the other by Stephen Suckor at BBC’s “HARDtalk.”  Both interviews were incredibly and surprisingly powerful.

As many people know, Ingrid Betancourt is the recently released hostage kidnapped by left-wing FARC guerillas in 2002 and held prisoner in the jungle for over six years ago.  Last July 2, in a stunning and bloodless undercover military operation, she and fourteen other captives were rescued by the Colombian National Military.  Her miraculous liberation and her dramatic reunion with her mother and two chidren–now both young adults–have captured the imagination not only of Colombia and France, of which Ingrid is a national, but of the whole world.

In the operation codenamed Jaque (Spanish for “checkmate”), military agents posing as FARC guerrilas had informed Betancourt’s captors of an “international mission” that was coming to check on the hostages. As scheduled, a white helicopter appeared in the sky and landed in a predetermined place.  Colombian security forces posing as FARC rebels jumped out.  To Ingrid Betancourt’s humiliation, she and the other hostages were handcuffed and placed aboard the helicopter, along with two of their FARC guards.  Ingrid felt only dismay because she thought that this was yet another media ploy of the FARC.  But soon after the helicopter lifted off, before she knew it, the two FARC officials with them were quickly disarmed and subdued.  According to Betancourt, the leader of the group then turned and announced, “We are the national military.”  Then he said the words that, for her, were pure gift:  “You are free!”

Asked about what she has learned most during those years in the jungle, Ingrid says it is man’s inhumanity to man, the wickedness that people are capable of committing against other people. At one point, she pauses, her eyes lost in those years, and then says:  “Many things happened in the jungle that we have to leave in the jungle.”

Towards the end of the “HARDtalk” interview, Steven Sackur asks Ingrid Betancourt a final question: “I just wonder, when you think about yourself, Ingrid Betancourt: How have you changed over the last six and a half years?  How are you different now from the woman you were running for president in 2002?”

This time Ingrid doesn’t pause before she answers.  It seems that she has thought about this question many times.  Her answer is like a breath drawn from deep inside her soul: “I am a woman.  I am a fragile woman.”  And then she adds, “The difference is that now I know.”

Many times while watching this incredible woman in both interviews, I found her image suddenly swimming in my tears.  Afterwards I asked myself what it was that had moved me so much.  I guess it was the person of Ingrid Betancourt, so serene and so wise–and so good–despite her imprisonment and torture in the hands of the FARC guerillas.  Here was a woman who had suffered unimaginable horrors for over six years, who had every reason to be bitter and to hate her captors, yet no matter how I searched her eyes and voice, I found no bitterness and no hatred in her.  Instead I found a woman of deep faith and love.

In the gospel passage today, the Lord tells the parable of the sower who scatters seed everywhere.  It is a farming strategy that makes no sense to me.  To scatter seed with such extravagance and with such abandon, with no consideration of where the seed may fall–tell me, what’s the point?  Why doesn’t the sower reserve the seed only for the rich fertile soil?  Why waste all that seed on what he knows is rocky, thorny, barren soil?

I think God has answered my question through Ingrid Betancourt’s story:  The Lord scatters his word everywhere because he knows that you never know where his word will bear much fruit.  In the case of Ingrid Betancourt, who would have thought that God’s word can yield so much good in the worst of  her experiences?  The worst of humanity–its rockiest, thorniest, most barren souls–has brought out the best of it in Ingrid Betancourt’s own soul.

God knows that even in the rockiest, thorniest, most barren places, we can sometimes stumble over rich and fertile soil.

Here’s a Quick Question for you:  “What are the rocky, thorny, and barren places in your life?  Could God be sowing some precious seed–even and especially in those places?”  Think about it, and if you feel up to it, share a thought, a feeling, or a question. Who knows? You might help another reader with your sharing.

And here is the raw footage of the rescue operation codenamed “Jaque.” No words can describe the disbelief, joy, and relief on the faces of Betancourt and her companions when they finally realized that they were–at last–free. 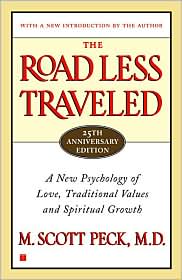 In his bestselling book, The Road Less Traveled, M. Scott Peck drops a line that makes you feel like dropping his book.  In the very first sentence, he declares quite simply and bluntly:  “Life is hard.”

Now, tell me:  Who wants to be reminded about that?  I don’t know about you, but that’s one truth I’d rather not deal with.  Of course that doesn’t change the fact that life is, in fact, hard–and we know it.  That’s probably why Peck’s book became a No. 1 bestseller over twenty five years ago and continues to be read today–its dire and ominous opening notwithstanding!